The Inner World of Music 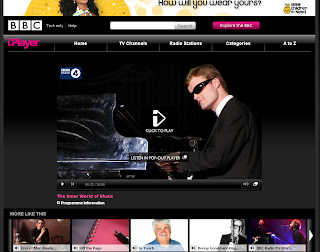 Composer Matthew King discovers how the extraordinary abilities of musical savant Derek Paravicini are unlocking the secret of how we all make sense of music.

Pianist Derek Paravicini is a phenomenon, possessor of a truly extraordinary musical mind. His abilities are renowned: he can play virtually any piece, in any style you wish, in any key, and identify complex chords of more than a dozen notes in split seconds. He has wowed crowds from London to Las Vegas, performed at Ronnie Scott's and Queen Elizabeth Hall, and been the subject of media attention across the world.

Yet Derek was born totally blind, with severe developmental and learning disabilities. He finds everyday tasks difficult, and requires 24-hour support. Derek is a musical 'savant' - owner of a talent that far transcends his disability, like the autistic artist Stephen Wiltshire or Dustin Hoffman's character Raymond Babbitt in the film Rain Man. Over the last three decades Derek has stunned experts with his seemingly effortless musical understanding, an innate ability to know what 'fits' in any musical context, from classical to jazz to rock.

Prof Adam Ockelford has been Derek's friend and mentor since he was a small child. Now one of the UK's leading experts in music psychology, Prof Ockelford believes that Derek's remarkable abilities may hold the key to understanding how humans make sense of music, and the unique effect it has on us all.

Matthew King explores the world of the musical savant, meeting Derek Paravicini to try and find out how his brain processes, understands and remembers music. The programme features contributions from Dr Darold Treffert, adviser on Rain Man and the world's most renowned expert on savant syndrome, and the parents of a young autistic girl with remarkable musical gifts.

Posted by Derek Paravicini's Official Blog at 02:05 No comments: 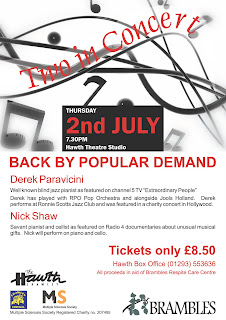 Back by popular demand, Derek is performing in a concert at the Hawth Theatre Studio in Crawley, West Sussex on Thursday 2nd July at 7.30pm.
Tickets are £8.50 each and can be booked online at www.tickets.hawth.co.uk or by phoning the box office on 01293 553636.
Proceeds are going to Brambles Respite Centre for people with MS.
Posted by Derek Paravicini's Official Blog at 11:15 No comments:

Derek at the QEH

Posted by Derek Paravicini's Official Blog at 07:52 No comments:

Derek Paravicini, the blind musical savant nicknamed "the human iPod",
is to give his first full concert accompanied by an orchestra.
By Ben Leach
Published: 8:08AM BST 28 May 2009

The 30-year-old will play a series of concerts in Bristol and the
Queen Elizabeth Hall in London's Southbank Centre.
He incurred brain damage during birth and suffers from severe learning
difficulties and autism.

He is blind, unable to read Braille and can barely count, let alone
read music, but thanks to his extraordinary memory, he can play
anything after hearing it only once.

Paravicini's teacher and mentor, Adam Ockelford, a professor of music
at Roehampton University, said the concerts will mark the next stage
in a turbulent relationship between the two.

"It took quite a few months before he would let me play his piano at
all," he said. "It was his territory, and if I tried to play a note on
it, he'd hit me and push me out of the way with his head.

"The only way to teach him was to pick him up, shove him on the other
side of the room and quickly play something before he could get back
to the piano.

"It was a good game, because that way he could copy what I played. He
didn't talk very much, but music became a sort of proxy language. He
realised he could communicate with people through his music."

Roger Huckle, director of Bristol's Emerald Ensemble, the orchestra
that will accompany Paravicini on his tour next month, says the
pianist's unpredictability is also his greatest strength.

"He has no fear," he said. "Most musicians will be very aware if they
play a wrong note, but that critical side of it isn't really in
Derek's make up.

"If he does play something wrong he can cover it up within half a
second. But having said that, I don't think he really perceives it as
making a mistake."

A dailymail.co.uk article from Evangelos Himonides

The human iPod: Derek Paravicini is blind and severely disabled yet can master any song after hearing it once... What is his secret?

You'll have heard of perfect pitch. Well, Derek has absolute pitch — a rare gift, meaning that, when he hears a chord with ten notes in it, he can identify every one.

The Independent -- The human iPod: Meet the musical savant

e.himonides@ioe.ac.uk has sent you this article from The Independent.

The human iPod: Meet the musical savant
Almost 25 years ago, Adam Ockelford was giving a piano lesson to a young girl at Linden Lodge School for the blind in Wandsworth, south-west London, when a couple and their five-year-old son who were touring the school opened the door to his room. Moments later, the little blond boy...

Posted by Derek Paravicini's Official Blog at 11:08 No comments:

Derek Paravicini and the Emerald Ensemble 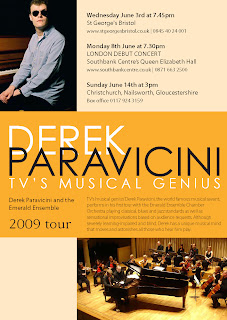 TV's 'musical genius' Derek Paravicini, the world famous musical savant, performs in his first tour with the Emerald Ensemble Chamber Orchestra playing classical, blues and jazz standards as well as sensational improvisations based on audience requests. Although severely learning-impaired and blind, Derek has a unique musical mind that moves and astonishes all those who hear him play.

Posted by Derek Paravicini's Official Blog at 09:38 No comments:

What is autism? the podcast...

Posted by Derek Paravicini's Official Blog at 00:41 No comments:

Of all the mental states being reassessed in 2008 autism and
Asperger's must come near the top. Wendy Barnaby visits the Royal
Society in London to hear from international experts - and she also
meets a brilliant young pianist with Asperger's who explains how he
performs so well but needs help for everyday living.
Guests

Allan Snyder
Director for the Centre of the Mind University of Sydney
http://www.centreforthemind.com/director/index.cfm

Douwe Draaisma
Professor of the History of Psychology University of Groningen The Netherlands
http://www.douwedraaisma.nl/english/index_en.html

Autobiographies by people with autism: Nobody Nowhere, Somebody
Somewhere, Like Colour to the Blind and Everyday Heaven, all by Donna
Williams and published by Jessica Kingsley Born on a Blue Day by
Daniel Tammet published by Free Press The Mind Tree and How can I talk
if my lips don't move? by Tito Rajarshi Mukhopadhyay both published by
Arcade Publishing
Publications

Posted by Derek Paravicini's Official Blog at 03:52 No comments:

Derek features in the Daily Mail

http://www.dailymail.co.uk/health/article-1112622/Hormone-clue-lead-pre-natal-screening-autism.html
Posted by Derek Paravicini's Official Blog at 02:41 No comments:

In the Key of Genius: Recital 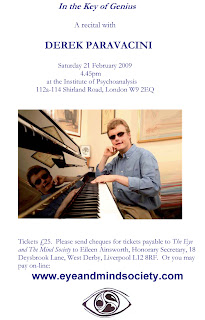 A recital with DEREK PARAVACINI


Or you may pay on-line: http:// www.eyeandmindsociety.com

Posted by Derek Paravicini's Official Blog at 07:10 No comments: